Ken Mammarella
Out & About Magazine

The three founders of Futures First Gaming are paying forward some of the help they’ve had to become successful in work and life. They’re doing it with video games and esports.

“We resonate with kids. We understand their struggle,” said Malcolm Coley, who grew up amid the scourge of violence in Salem, N.J. “I’m not a role model. I’m a real model. I make mistakes, too, and learn from them.”

“We’re living proof that you can get there,” said Stephen Sye, a friend from Salem.
“We’re all serial entrepreneurs.”

Newdy Felton grew up with a single mother in Wilmington’s Hidden Valley. “I had to learn on the streets how to be a man,” he said. “I didn’t sell drugs. I sold candy.” Inspired by his grandmother, who sold platters of food and other items from her home in Wilmington’s Southbridge, he was just 10 when he hired his first employee for his candy empire.

All three believe in the potential of esports.
“Gaming is a carrot for Black and Brown players to get into coding, streaming, event planning and production,” Sye said. “We’re leveraging their passion.”

Sye said 83% of Black teens play video games, but Black entrepreneurs make up only 2% of the gaming/technology developer community.

They hope to make Wilmington a center of esports. Futures First is headquartered at the Win Factory, a co-working space on the Wilmington Riverfront. They dream of the Futures Dome, ideally a 20,000-square-foot space that would have enough room for all that they want to do.

Geography may help. Recent number-crunching by WalletHub of America’s 100 largest cities places Philadelphia and Baltimore in the top 20 for gamer and developer opportunities.

“Gaming builds skills on how to get through life and work,” Coley said. Teams. Interpersonal communication. Strategies. Camaraderie. Entrepreneurship. Focus. Skills for the 21st and even 22nd centuries, Sye said, saying he and Coley hope their children will carry on the philosophy.

Futures First is accredited by STEM.org for the curriculum and authorized by the State of Delaware as a workforce development program provider, starting with a partnership with the Delaware Department of Health and Social Services.

They want to create more opportunities for Black coders and Black gaming/technology entrepreneurs. For this school year, they want to get into as many school districts and create a scalable model.

So far, they have contracts with Freire Charter High School in Wilmington and Egg Harbor Township schools in New Jersey. They’re talking to the William Penn School District in Landsdowne, Pa., school districts in DeKalb County, Ga., and Orange, N.J.

One early and promising find is Delawarean Jordan Pierce. After his parents invested in a gaming computer, he’s “in the position to monetize his gaming,” Sye said. And he’s only in middle school. 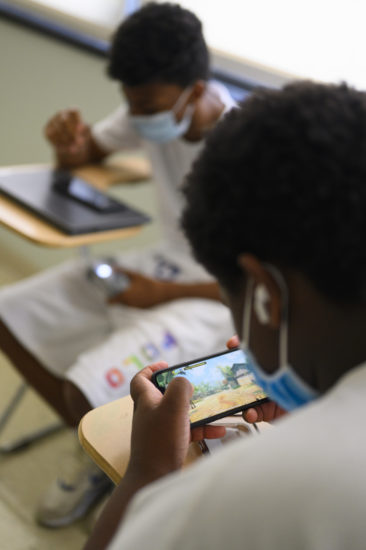 A summer camp at the end of June for Freire students featured Rocket League and Call of Duty: Warzone, popular games that they know will connect to local teens.

For the community at large, they regularly host leagues. They also have two tournaments planned: the Fall Brawl in September and Pandamonium at the end of the year.

Futures First’s mascot is an angry panda named Jerome. “He signifies the reputation of gamers,” Sye said. “They tend to be solo, peaceful, insightful. But incite them, and they’ll go wild.”

Donate Delaware Is Ready to Help