In his first live-stream cooking class, Chef Robbie Jester reveals the secrets to his famous shrimp scampi — and helps kick off this year’s Kitchen Tour

Around these parts, Robbie Jester is known as “The Chef Who Beat Bobby Flay.” Back in 2016, Jester outflanked Flay with a sumptuous shrimp scampi on one of the Food Network’s most successful shows, Beat Bobby Flay, now in its 27th season. 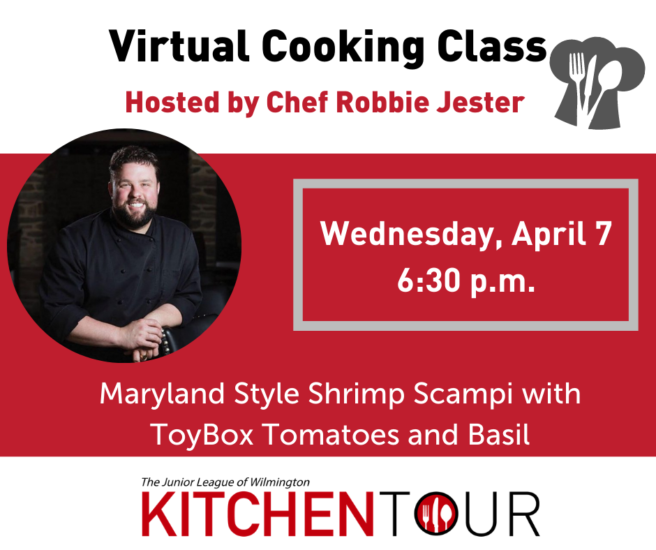 On Wednesday night, April 7, you can learn the secrets to Jester’s scampi in a live-streamed cooking class, his first, which helps highlight week one of the Junior League of Wilmington’s Kitchen Tour — Reimagined!

“It is definitely the authentic version of what I did on Beat Bobby Flay,” Jester says of the dish that won him a victory on prime-time TV. Nearly five years later, he still considers the victory to be a career highlight.

“It’s one of those things that doesn’t get old,” Jester adds with a smile. “I think a lot of people like to see him get beat. He’s tough. I’ve been watching recently, and he’s been winning a ton of them. So, it does feel like you’re in this special club when you beat Bobby Flay.”

Although Jester isn’t offering membership into that “club,” he is offering some of the secrets that got him there.

In addition to offering livestream cooking classes, this year’s Kitchen Tour showcases some of the area’s finest kitchens all month long via a self-guided virtual tour, also a first for the Junior League of Wilmington.

“In years past, tour-goers had only one day to see the kitchens on the tour, but this year ticket holders have access to the virtual kitchens for a full month,” says event chair Tara Wheeler. “They’ll also have access to product information right at their fingertips. If they want to know about an appliance or a light fixture, the link is one click away.”

Tickets and details about Kitchen Tour — Reimagined! can be found at JLWilmington.org. Each tour ticket is $30 and includes a complimentary cooking class. Additional cooking classes can also be purchased on the website.

In the video below, Jester talks about his first live-stream cooking class as well as his rewarding experiences at High 5 Hospitality, which he just left to pursue his personal ventures, Full Circle Food and The Great Big Jerk.

IN a Minute: Party Time (Soon!)